Social media is ablaze with fury over Bunnings’ controversial ban on customers’ dogs from the store unless they wear a muzzle.

Introduced in 2015, the policy followed an accident resulting in a child being bitten by a dog while shopping at the hardware giant.

“You have to muzzle your dog in Bunnings?! Just because some silly kid didn’t ask permission before touching a dog and got nipped? F***ing pathetic,” one customer wrote on Facebook.

The shopper recalled the moment she brought her “friendly” dogs to a Bunnings in Perth, and was instantly ordered to remove them since they didn’t have muzzles.

“Muzzles are for aggressive dogs and evil crotch goblins. Not friendly, loving pooches,” she said.

The woman voiced her concerns in a Facebook group, prompting hundreds of online commentators to chime in.

The rule, which can be found on Bunnings’ website, states that dogs must either be carried, sit in a trolley, or on a lead and muzzled. 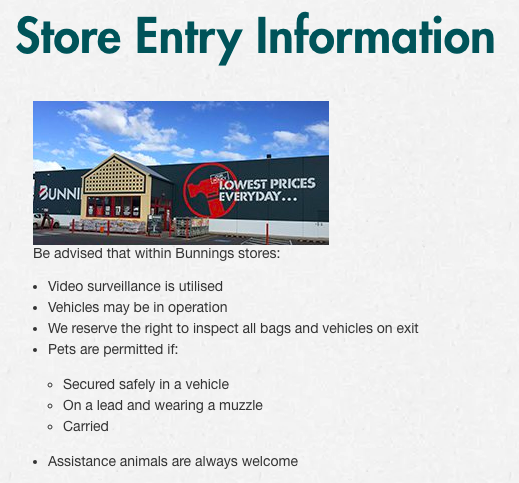 Prior to 2015, dogs were allowed in all Bunnings stores without muzzles, as long as they were “under appropriate control, not aggressive and did not compromise anyone’s safety”.

The new rule came into play after a five-year-old was bitten on the leg by a dog inside a Melbourne store.