Now British department store chain Debenhams has made a step forward in promoting body confidence by becoming the first high street retailer in the UK to permanently introduce size 16 mannequins.

The new mannequins, which were trialled three years ago, will be used at its shop in Oxford Street, London.

They will appear alongside size 10 dummies on all women’s fashion floors, before being introduced in all 170 of Debenhams’ UK stores.

Size 10 is the standard size for mannequins on the high street, a far cry from the dimensions of the average British woman. 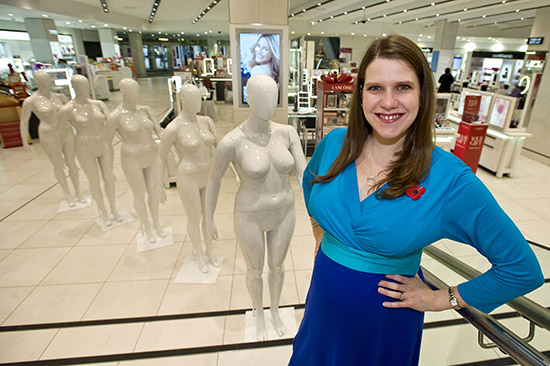 Debenhams director Ed Watson said: “The average British woman is a size 16, but the high street has been showing them clothing on a mannequin that is three sizes smaller – until now.

“Having worked on this project for three years, we hope that it will help people in some small way to feel comfortable about their bodies and, crucially, that other retailers will follow.”

The move was backed by equalities minister Jo Swinson, who has led a British government drive to promote body confidence among women.

She said: “The images we see in the world of fashion are all pretty much the same – it’s as if there’s only one way of being beautiful. Yet nine in 10 people say they would like to see a broader range of body shapes shown in advertising and the media.

“That’s why the government has fought hard to challenge our looks-obsessed culture. Our Body Confidence campaign has been working with the retail industry and others to encourage a diverse range of models.

“Recent research found that women are three times more likely to buy clothes when the fashion models are their size, so I hope more retailers will recognise that meeting customer demand for more diversity makes good business sense.

Debenhams has a history of defying conventional fashion promotion, using a disabled model when it launched its Principles range, banning airbrushing on swimwear advertising and running a lingerie campaign featuring a model over 50.