Every few weeks there’s another thing the people of “The Internet” are arguing about.

This time around, it’s a children’s puzzle about fruit.

Due to a bit of visual trickery, the puzzle has caught out a few people who are lacking in the attention-to-detail department. 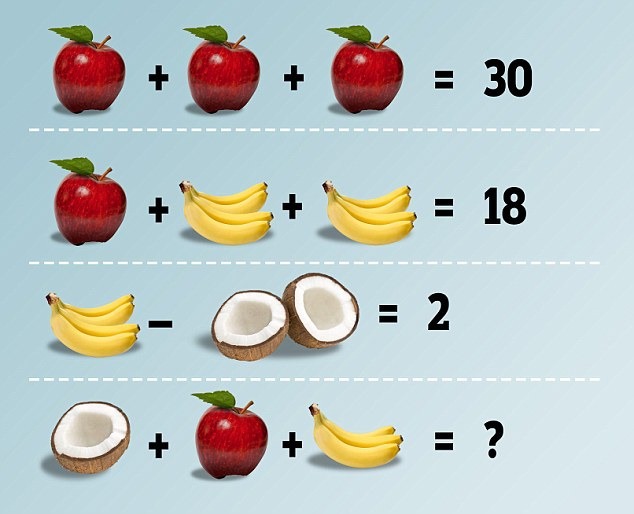 Right, so first we work out that each apple represents 10 – easy, yeah?

Then we work out that each banana bunch is worth four – too simple.

We move into a bit of subtraction (tricky stuff here), and work out that the coconuts are worth two.

But it’s the final equation that’s tripping everyone up. If you look closely you can see in the banana bunches worth four, there are four bananas in the bunch.

In the final equation there are only three pictured. Same with the coconuts, in the coconut equation the two halves are worth two, so what’s one half worth? Yep, it’s one.

Most people then deduce the answer is 14 (1+10+3), but others just simply aren’t having it, believing that the coconut image still represents two and the banana image always represents four, regardless the change in illustration – which then gives them the answer of 16.

Not that we’re really surprised that The Internet will find a way to disagree, even on a children’s puzzle.