We were BEYOND excited when we found out that our favourite couple to come out of the Bachie franchise, Snezana Markoski and Sam Wood, were having another baby!

Inez and Sam already share a daughter together, one-year-old Willow, as well as Snezana’s teenage daughter Eve from a previous relationship.

And by the looks of things their little family will be expanding much sooner than expected!

While the pair only announced that Snez was pregnant in February of this year, with an adorable Instagram post we might add, it seems that her due date is not far away.

🍾🚗👏🏽A big woo hoo from our family to the family @mercedesbenzberwick Just awarded the best dealership in Australia for the 5th time in 6 years and we know why. Thanks for always looking after us and a big congratulations 🍾🎊 🎉 #mercedesbenzberwick #thebest

As in we’re talking NEXT WEEK!

Taking to the comments on her recent Instagram post of hubby Sam playing with Willow, Snez appeared to giveaway her due date.

“How much longer till her little cece makes her arrival?” someone asked.

“Only a week away!” Snez replied! 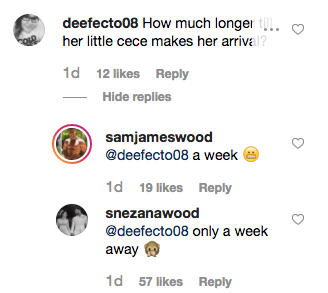 We already know that the new addition to the Wood family will be a baby girl after they posted an adorable video reveal to Instagram shortly after the pregnancy announcement.

Their bub will join a bunch of other Bachie babies that have been brought into the world just recently, including Lisa Hyde’s daughter Myja-Jae, Emily Ghougassian’s daughter Laila Belle and Matty J and Laura Byrne’s daughter Marlie-Mae Rose.

Missed Laurel Gary & Mark? Catch up by clicking play below and join us from 5:30AM every weekday!
baby sam wood snezana markoski the bachelor