Sinead O’Connor certainly isn’t one to hold her tongue… strangely enough, a similarity she shares with Miley Cyrus.

But don’t tell Sinead that, because she’s once again set her sights on the former Hannah Montanna star.

In a post on her blog, the Irish singer has quite pointedly asked “URGENT! DOES ANYONE KNOW THE WHEREABOUTS OF THIS GIRLS PARENTS?” alongside a picture of Miley posing on stage with a mouthful of cash (as you do). 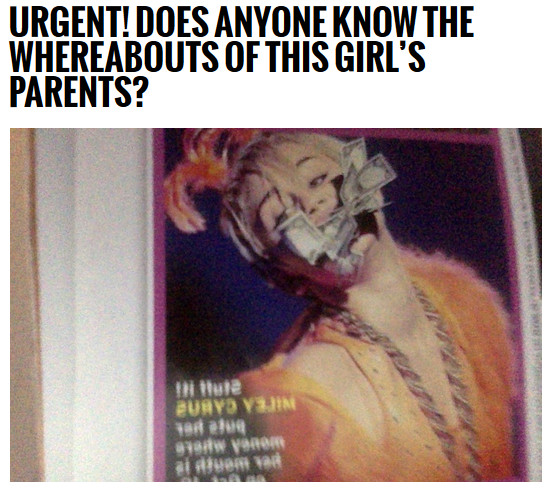 She goes on to ask if this is what people are calling female empowerment, blaming the music industry for the sexualisation of artists.

“This photo is the very image of what the industry has done to music and musicians,” she said.

“And they’ve done it because musicians are the heroes of the young.

“We’re to look sexy and shut up. And we do it for the money.  Only the industry is making way more out of us than we ever will.

“And we are failing in our duty to be heroes.”

The article comes just a year after the pair launched into an online feud after Miley compared her Wrecking Ball video as the modern generation’s Nothing Compares 2 U.

At the time, Sinead wrote an open letter “in the spirit of motherliness and with love”, telling the star:

“I am extremely concerned for you that those around you have led you to believe, or encouraged you in your own belief, that it is in any way ‘cool’ to be naked and licking sledgehammers in your videos,” she said.

“It is in fact the case that you will obscure your talent by allowing yourself to be pimped, whether its the music business or yourself doing the pimping.”

Wonder how Miley will respond this time…

URGENT! DOES ANYONE KNOW THE WHEREABOUTS OF THIS GIRLS PARENTS?

Because they appear to be missing in action.

In short, no human being on earth would be photographing, filming or watching my child-like looking daughter dressed as a stripper with a load of cash stuck in her mouth.

Is anyone seriously calling this female empowerment?

It is the exact opposite.

If you imagine I’m talking bollox remember no one believed priests were sexualising minors either.

I have a history of being right about these things..

I am not suggesting Miley is consciously engaging in the sexualisation of minors.

But I am stating she unconsciously is.

And that the industry knows full well what it is doing.

Whether or not these artists feel its their ‘choice’ to be sold on the basis of their sexuality is beside the point.

THEIR UNDER-AGE AUDIENCES HAVE BEEN GIVEN NO CHOICE AS TO WHETHER OR NOT THEY WISH TO BE SEXUALISED BEFORE THEIR NATURAL TIME.

This photo is the very image of what the industry has done to music and musicians.

And they’ve done it because musicians are the heroes of the young.

(That is why one of the first things dictators do when they get into power is kill or imprison musicians and all other kinds of artists who don’t tow the line.)

We’re to look sexy and shut up.

And we do it for the money.

Only the industry is making way more out of us than we ever will.

And we are failing in our duty to be heroes.

These parents said there was no indication on the tickets or in any of the publicity or promotion for the show, that it would not be suitable for minors.

This is an artist who’s audience are at least a quarter minors every night.

Not only are musical artists being used without their understanding in order to sexualise minors, but also to make the same minors grow up not knowing the power music has to smash evil and create life.

They think music is all about sex.

Its a genius double win for an industry crawling with evil.

A whole generation is groomed and silenced.

See the photo that sparked it and more from Sinead at