Shane Warne’s daughter has deleted a post on Instagram after she was shamed for posting photo mocking the Holocaust, the two Malaysia Airlines disasters and the controversial death of Cecil the Lion.

Brooke Warne, reportedly uploaded a photo to her instagram account showcasing herself, with a stuffed lion among a group of friends dressed as injured flight attendants and striped concentration camp victims. 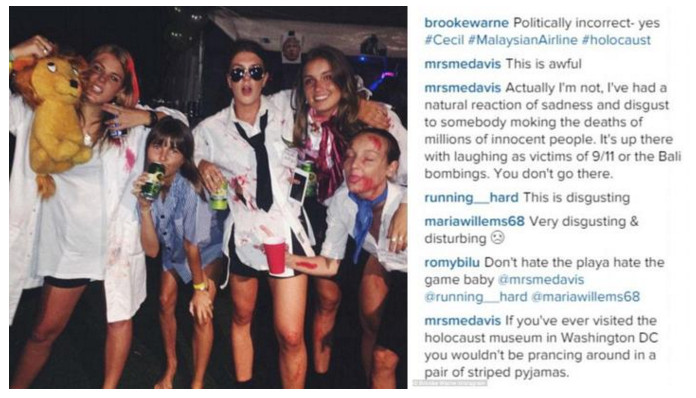 The photo, which has since been removed from Instagram was captioned: “Politically incorrect- yes #Cecil #MalaysianAirline #holocaust”.

Warne showcased the photo to her 10700 followers, referencing the killing of Cecil the lion by American trophy hunter Walter Palmer in Zimbabwe last year, as well as poking fun at the MH17 and MH370 Malaysia Airline atrocities and the genocide of millions during World War II.

The 18-year-old was hit with criticism almost immediately with followers describing the post as “disgusting” and “awful”.

“I’ve had a natural reaction of sadness and disgust to somebody mocking the deaths of millions of innocent people. It’s up there with laughing as (sic) victims of 9/11 or the Bali bombings,” Maryellen Davis commented.

“You don’t go there. If you’ve ever visited the Holocaust museum in Washington DC you wouldn’t be prancing around in a pair of stripped pyjamas,” she added.