The new dating show is designed to target four couples on the brink of relationship collapse are split, swapped around and matched by psychologists with someone else in the group deemed more ‘like-minded’.

They’ll spend two weeks together and have to share a BED!

Last night, we met Jackie and Tim, a couple who have been together for three and a half years.

The biggest bone of contention in their relationship is Tim’s lack of affection – and it’s becoming a very big issue.

Jackie revealed that Tim had only said ‘I love you’ once in the time they’ve been together – and it was in a text message, that she’s saved.

The shocking revelation came after fitness enthusiast Jackie tried to coax Tim, 28, into saying ‘I love you’ back to her before they separated for two and a half weeks for the show.

‘As much as you annoy the f*** out of me, I actually love you,’ Jackie said to him ahead of her departure.

However, instead of saying it back to his beloved, she was left with an awkward silence.

‘Say you love me back on TV you f***head,’ she bellowed back at his blank response.

Upon her departure, Jackie tried to hug and kiss Tim, but he failed to even put his arms around her – and he even awkwardly dodged her kiss. They rubbed cheeks instead. 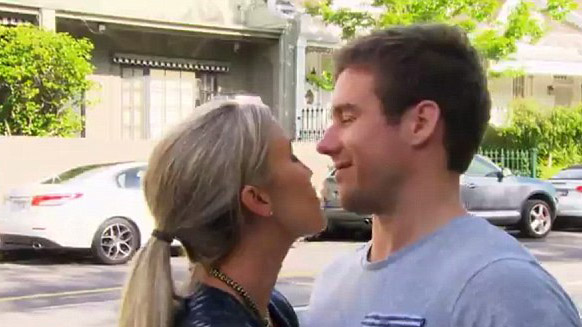 Jackie abruptly said: ‘Still not showing any affection as I am leaving you a**hole?’ As she walked out, Jackie stated that she was giving Tim ‘one more chance’ to show her some sort affection before she left.

Earlier in the episode, Jackie admitted that Tim doesn’t like public displays of affection and is in fact not a very affectionate person altogether.

‘He doesn’t like holding hands and is not very romantic,’ she said.

Tim justified his actions by admitting that he felt holding hands was a ‘pointless activity.’