Sir Paul McCartney is continuing his assault on the 2015 pop charts by adding Lady Gaga to his list of collaborators.

The Beatles star is currently riding high with FourFiveSeconds, his collaboration with Rihanna and Kanye West.

It’s now emerged he has also been recording with another pop contemporary singer.

Lady Gaga has revealed the news by posting pictures of their studio session online, explaining they had teamed up to work on one of McCartney’s “secret projects”.

In one picture, posted on Instagram, the veteran star is seen posing next to Gaga and a band of musicians including Pearl Jam guitarist Mike McCready. 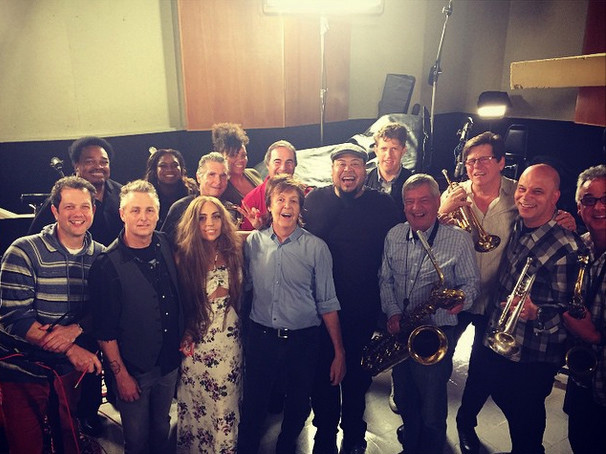 Gaga added in a caption: “Had a beautiful session with Sir Paul McCartney and friends. Working on one of his many secret projects! Killer musicians, vibe, and lots of laughs.”

The Poker Face star also added a shot of herself posing with McCartney at a drum kit, and revealed the project almost did not come to fruition because she hung up on the music legend when he initially called her to suggest the collaboration.

She writes in a caption, “Always a good time with my buddy,. I’ll never forget when he called me last year to work and I hung up the phone cuz (because) I thought it was a prank!” AAP