Sinead O’Connor has retired her hit song Nothing Compares 2 U.

The Irish singer says she has ceased singing the Prince composed classic for good.

In a statement on her Facebook page Sinead wrote: 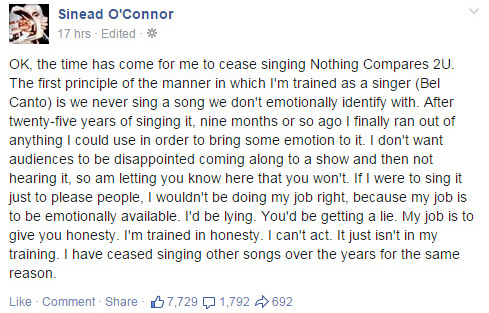 Nothing Compares 2 U was written by Prince in 1985 for his side-project The Family.

The song originally appeared on The Family’s one and only album that year.

O’Connor recorded the song as a tribute to her mother who had died in 1985.

Her version of the song was included on her second album I Do Not Want What I Haven’t Got, released in 1990.

The album sold over two million copies in America and was also double platinum in the UK.

The song won a Grammy Award for Best Alternative Music Performance in 1991, however Sinead refused to accept the award.