A mummy blogger has been slammed after ‘celebrating’ her son’s birthday by revealing that her son is the least “liked” of her kids on Instagram.

Katie Bower said that her son “never got as many likes or comments” as photos of her other children.

The DIY and parenting blogger, who has more than 52,000 followers on Instagram, began the post about her son Weston – which has since been deleted – by saying how “thankful” she was for her “cuddly and easy” little boy.

However, it didn’t end there. The post took an awkward turn when Katie Bower mentioned the significantly less likes Weston receives, in comparison to her other children.

“Guys I am gonna be perfectly honest…Instagram never liked my Munchkin and it killed me inside. His photos never got as many likes. Never got comments. From a statistical point of view, he wasn’t as popular with everyone out there. Maybe part of that was the pictures just never hit the algorithm right,” she wrote. 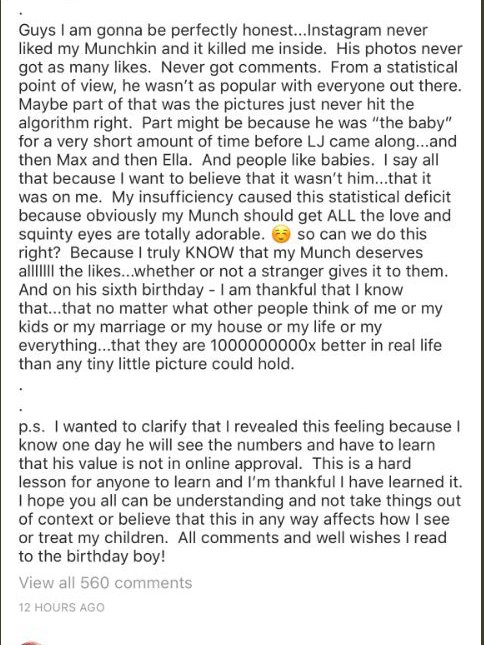 “Part might be because he was “the baby” for a very short amount of time…And people like babies. I say all that because I want to believe that it wasn’t him…that it was on me. My insufficiency caused this statistical deficit because obviously my Munch should get ALL the love and squinty eyes are totally adorable.”

She then urged followers to give him “likes” for his birthday, writing: “I wanted to clarify that I revealed this feeling because I know one day he will see the numbers and have to learn that his value is not in online approval.”

It wasn’t until the post started circulating the Internet that the backlash really took off, with a slew of users slamming the Instagrammer.

“Kids know there’s likes on photos and it’s very human nature to compare,” she said. “So for me, my personal growth journey is teaching my kids it doesn’t matter.”

She has assured her followers that she will still be reading her son the birthday wishes he received online.

Little House on the Prairie's Katherine MacGregor Dead At 93