Kasi Brown worked as an assistant to the Hollywood star and spoke to The Huffington Post about what it was like working with him.

Back on Halloween night in 2003, Brown was talking to her friend and boss, DiCaprio about the holiday in the actor’s trailer for the movie The Aviator – a movie that would earn DiCaprio his first of four nominations in the Best Actor category at the Academy Awards.

“‘Halloween is my favorite holiday,'” DiCaprio told Brown, and it was hers too.

“His face got serious and he said he liked the anonymity,” Brown told The Huffington Post over an email. “He said it was nice to be able to walk amongst people and interact with them without recognition. Just be like everybody else without any expectation.” 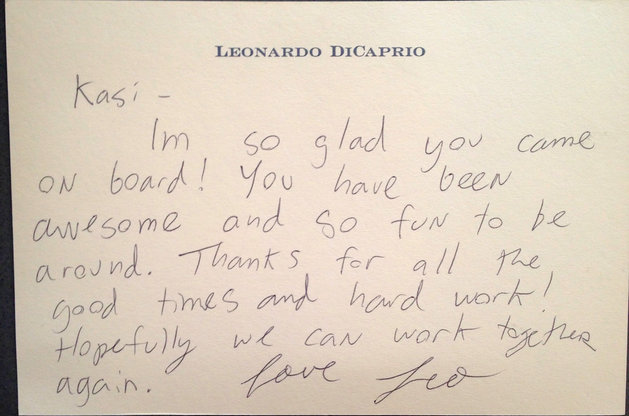 Brown became very aware of this desire in DiCaprio, and when he was rehearsing outside his trailer she would hold up an umbrella over his head so paparazzi “couldn’t snap photos of him making weird faces while he rehearsed.”

“Leo and I always had fun on set,” said Brown. She claimed that they particularly bonded over how they “love[d] to observe people and goof around playing characters, doing accents, whatever.”

They also joked around, and it proves how down-to-earth the actor is.

“Sometimes, I would pretend that he was the stereotype of an entitled celebrity and when he would ask me to do something, I would bow and in a beaten-down voice say, ‘Yes, sir, anything you like sir, anything else, sir?’ and he would laugh and tell me to knock it off,” Brown said.

To describe DiCaprio, she said he was “very smart” and knew a lot about “politics, pop culture, history, you name it,” and he also had a “wicked sense of humour.”

“He’s extremely down to earth, and he likes to share stories and life experiences with people,” said Brown.

She also learned from the actor, saying his devotion to his craft was inspiring.

“On the way to set one day, I saw that he kept stepping on all the cracks and spots on the floor in our path,” Brown recalled. “He was playing Howard Hughes, who has OCD, and I realized that he was getting into character.”

Brown even got to act alongside DiCaprio, and directed by Martin Scorsese in The Aviator. She was the offscreen ghost for DiCaprio’s onscreen mother, as she wasn’t available to shoot that day. Brown memorised the southern drawl and mimicked the original performance.

“When they cut, Marty came up to me and said, ‘You’re an actress!’ and Leo stepped off set and said, ‘Kasi!’ in an impressed voice,” Brown said. “They both made me feel really good about my acting and the work that I was doing to learn everything I could on set while assisting Leo.”

Last year, Brown made her own movie Gone Doggy Gone and DiCaprio “gave [her] encouragement all along the way,” despite how long its been.

According to Brown, DiCaprio is “just like everybody else without any expectation” by supporting others to achieve their dreams.