The Brekkie Team are used to getting some freebies from work – but nothing could prepare Laurel for The Gift she received yesterday afternoon!

In a blue box addressed to Laurel was a lint roller and a double pass to the movie The Gift, and a note.

“To get Tiger’s hair out of the bed before Troy gets home.” 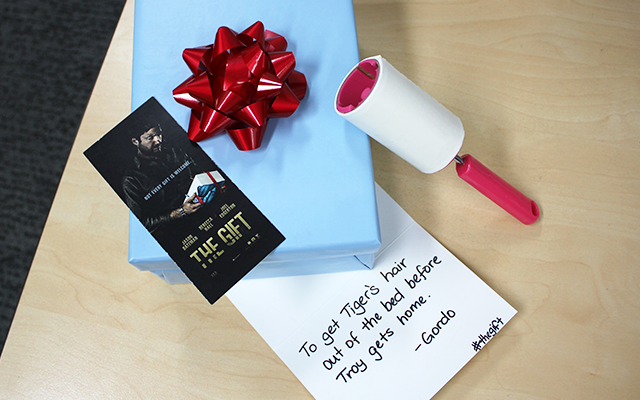 Laurel originally thought it was a little creepy and a bit of a joke, until she thought about it a bit more…

She had recently posted to her Twitter and Instagram about her cat, Tiger, taking advantage of napping in the bedroom while Laurel’s husband Troy Cassar-Daley is away on tour…

Can’t make the bed because Fatty wants a sleep in. Good luck getting your spot back @troycassardaley #sleepins #lazysunday #cutecats

We have to commend the marketing tactics of Roadshow for this ingenious promotion – even though Gary and Mark missed out!