And the young couple couldn’t be happier.

“We’re overjoyed to announce that Spurgeon has a new title in life, as ‘big brother!'” they told People. “We are so thankful that God is adding to our family.”

The Duggars, who came to fame in reality TV show 19 Kids and Counting, were forced into the spotlight last year when it was revealed that eldest son Josh had sexually assaulted some of his younger sisters – including Jessa.

Jessa and Ben also shared a series of sweet photos, with their cheeky nine-month-old bub clutching at a chalkboard that says “Doubling the Love – Feb. 2017”. 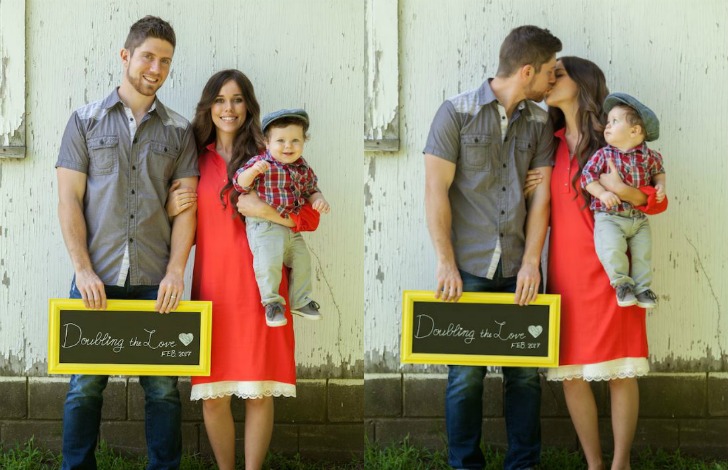 “We know Spurgeon will do a great job in his role,” the Seewalds continued. “Having Spurgeon has been such a wonderful blessing and we cannot wait to see the face of this sweet new baby (or babies!).”

It certainly wouldn’t be a surprise if Jessa was carrying twins; with two sets of twins among her impressive sibling count, they definitely run in the family!

Michelle and Jim Bob, the head of the Duggar clan, took to Facebook to share their excitement, writing: “Every child is a precious gift from God! We are so excited about another grandchild!”

Baby Seewald will make the religious couple grandparents for the seventh time.

Jessa, 23, is believed to be three months pregnant, and, while she has made no secret of her desire to have more children, the news means that she has pipped older sister Jill, who also has one son, to the pregnancy post.

During the May season finale of the sisters’ new show, Counting On, Jill, 25, hinted that she thought she would be the first to fall pregnant.

“I think we will probably be pregnant at the same time,” she said. “But to say who will be first, well, Israel is older… so we will see.”

The two sisters have also talked at length about adoption, so it seems that, either way, it won’t be too much longer until even more exciting baby news is announced.

You Can Buy A Second Hand Amusement Ride From Luna Park!

Home & Away Is Set To Kill Off Another Major Charachter

We Flood The Studio With Tears As We Surprise A Listener