“I’m the most unpopular kid at school and people make my life a living hell.”

They’re the heartbreaking words of a Queensland student that have quickly gone viral.

Sharing her story on a change.org petition, 13-year-old Tayla has detailed the daily torment she goes through at her high school.

“Every day people call me fatso, weirdo, ugly, freak, and tell me I should kill myself,” she shared.

“I’ve been pushed to the ground, had people go through my bag, or break my scooter when I rode it to school. Even people in other grades who I don’t know do these things to me too.

“Other people in my class throw things at me and film it on their phones. They tell me they’re going to upload it to the net.”

Despite telling teachers, her mum calling the school and going to the school for meetings, the bullying hasn’t stopped.

Now Tayla has taken things into her own hands and is hoping the petition will convince her school and the Government to take a stronger stance.

“I’ve been told to just ignore these people, but I can’t take it anymore,” she wrote.

“I don’t know what else to do or where else to go for help. My life is hell.”

The petition has already had more than 27,000 signatures in just five days, with many supporters have shared their own stories. 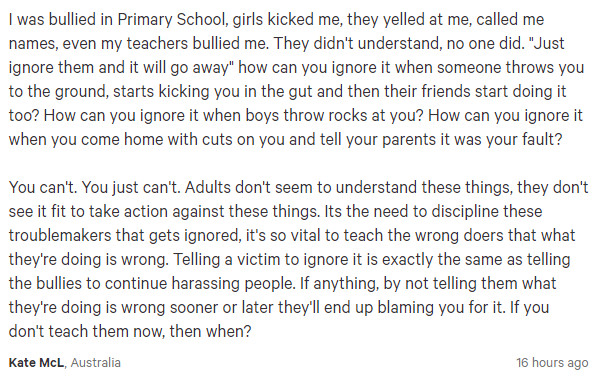 But perhaps the brightest part of this story is the support that has come from other parents and students at her own school.

Many have gone so far as to share their own names and promise they’ll stand by Tayla.

Let’s hope this is the beginning of a change.

And The Best Mobile Network In Australia Is...

Liev Schreiber Has A Willy Dance

The Monkees Are Heading To Australia In 2016