Matt LeBlanc has been announced as one of the new Top Gear presenters.

The former Friends actor will host the revamped show, due to air in May, alongside Chris Evans, it was confirmed on Thursday.

And Matt is more than a little excited about his new role, given that he’s a “lifelong petrolhead”.

“As a car nut and a massive fan of Top Gear, I’m honoured and excited to be a part of this iconic show’s new chapter,” Matt said in a statement. “What a thrill!”

Chris also revealed his excitement about the addition to the cast by tweeting a picture of himself and Matt alongside The Stig, adding: “Acting out our craziest car notions on screen is a dream job and I know we’ll both be debating some epic road trip ideas.”

Matt is no stranger to the programme, having set a record for the fastest ever time in the Star in a Reasonably Priced Car segment with a time of 1 minute and 42 seconds in a Kia.

While he has worked on various projects since the days of ’90s television series Friends, it’s still his role as Joey Tribbiani that Matt is most famous for.

The new Top Gear has not been without its issues, as Chris has been suffering from sickness after filming adrenaline-fuelled segments of the show.

Images from the crew at the Mazda Raceway track in Moneterey, California, last month showed Chris having to pull over to the side of the track and dash out of the sports car to vomit.

Still wearing his helmet, Chris was seen bending over with his hands on his knees as he appeared to wretch next to the £134,500 luxury vehicle.

He was then seen heading off the track, where crew members on the show rushed to his aid with advice and water.

It was previously reported that Chris was having problems with the pivotal aspect of filming the show – talking to the camera while driving.

“Chris is really struggling to master the art of driving and talking to camera, which is crucial,” a source told Britain’s The Sun newspaper. “He is in a massive sweat about it because he often ends up fluffing his lines.

“The professional drivers are doing a lot more to cover for him and the camera crew are getting frustrated.”

Chris was drafted in to host the programme after Jeremy Clarkson was fired from the show, with his fellow presenters James May and Richard Hammond quickly deciding not to continue without him. The trio have now signed a deal with Amazon. 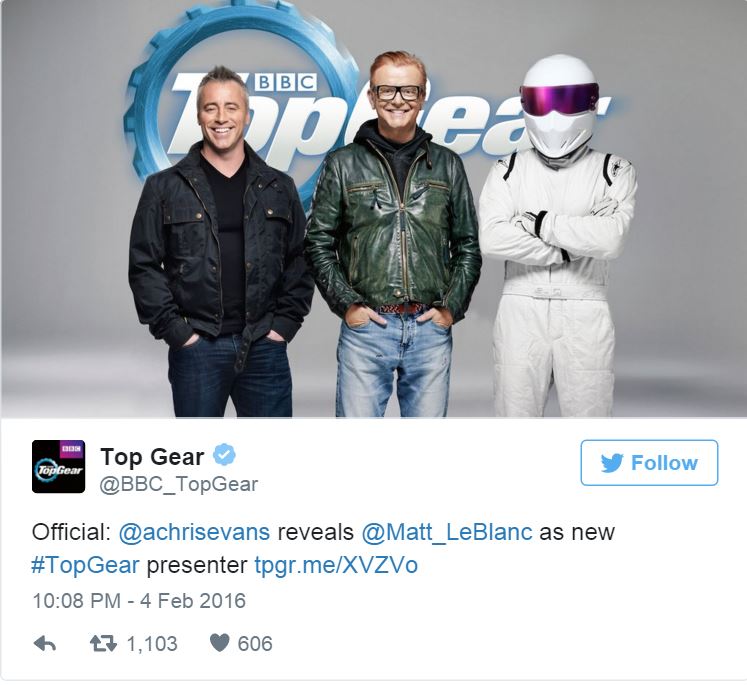