Héctor Valdivielso, the owner of Non Sit Peccatum sex shop in Toldedo, commissioned an artist to paint the religious icons on the sex toys. 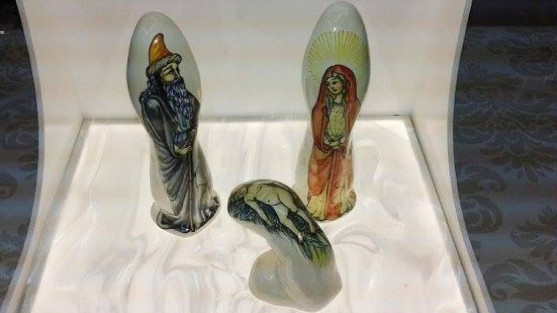 Well, we guess that’s one way to get into the Christmas spirit!

As you can imagine, the local Catholic community was wildly offended by the scene.

Valdivelso has since received threats by those claiming to be offended. ‘A man with his wife ordered me to remove the offending scene and said that if I didn’t, he would remove it himself,’ he wrote on Facebook.

Valdeivelso said his shop sign has since been vandalised with the word ‘sinners‘. A protest was also held outside his shop, where people yelled abuse at customers.

78.5% of people voted for the display to be reinstated and Valdivielso plans to put the raunchy display back in the store’s window front.

Do you find this nativity scene offensive? Tell us in the comments section below…

TRENDING NOW: Mum Forced To Move From First Class On Train Because Her Baby Was Screaming

Springsteen's Rad First Car Is On eBay Like Right Now

Just When You Thought Getting Bogged Couldn’t Get Any Worse

Blake Lively Is The Spitting Image Of James In Childhood Pic