The countdown is on for the release of ‘Gilmore Girls: A Year In The Life’ on Netflix – 79 days if you weren’t already aware.

Fans are wondering where life has taken their beloved characters since we last checked in at Stars Hollow and now we have a sneak peek of how it all starts back up again.

The first page of the revival script has been leaked by creator Amy Sherman-Palladino and it is everything you’d expect.

Witty banter, pop culture references galore and of course a reunion of our favourite mother-daughter duo Lorelei and Rory.

Take a read below. 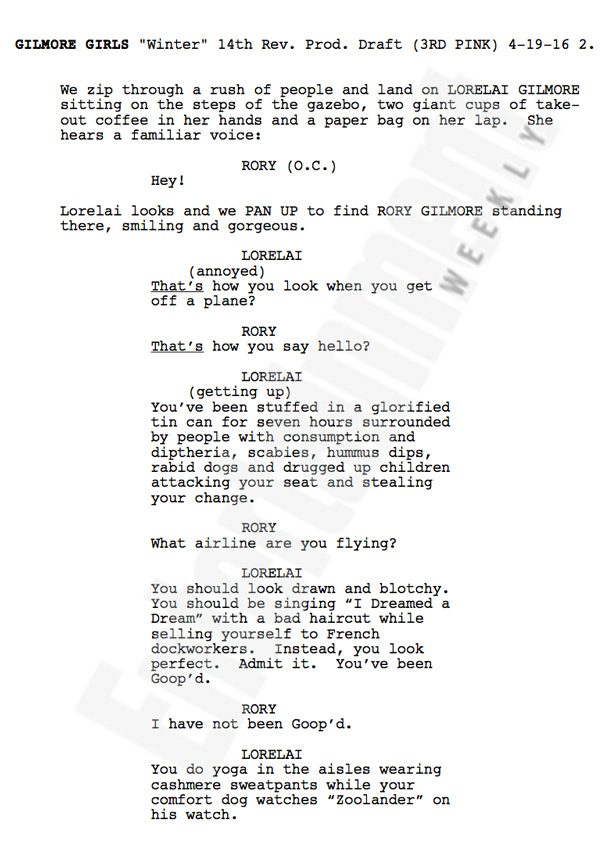 One thing that piqued our interest was the fact that Rory caught a plane to see Lorelei – and was stuck on the plane for seven hours.

With a bit of sleuthing we discovered that the flight from London to Hartford, Connecticut (which is the nearest city to the fictional Stars Hollow) is 7 hours and 15 minutes on average.

We know that when we left off from Gilmore Girls at the end of season eight, Rory was off to follow Barack Obama’s first campaign trail but could her career in journalism have taken her abroad?

Fans would also remember that her then boyfriend Logan Huntzberger had been stationed at one of his father’s media conglomerates in London for a period of time during the final seasons.

While the couple didn’t end up together at the end of the series, Team Logan may just have found one more reason to rejoice.

At least some things never change – the pair’s love of coffee and and quick witted banter.