Bruce Springsteen helped a young fan avoid trouble with his teacher by signing a late note after seeing The Boss in concert.

Nine-year-old Xabi Glovsky was treated to the rocker’s sold out show in Los Angeles on Tuesday by his dad Scott, and he caught Springsteen’s eye with a homemade sign that read, “Bruce, I will be late to school tomorrow. Please sign my note :)”.

Once the gig ended, that’s exactly what The Boss did.

The Born to Run hitmaker, who had just performed 35 songs in a mammoth gig that lasted nearly four hours, met the pair outside his dressing room immediately after his set had finished. 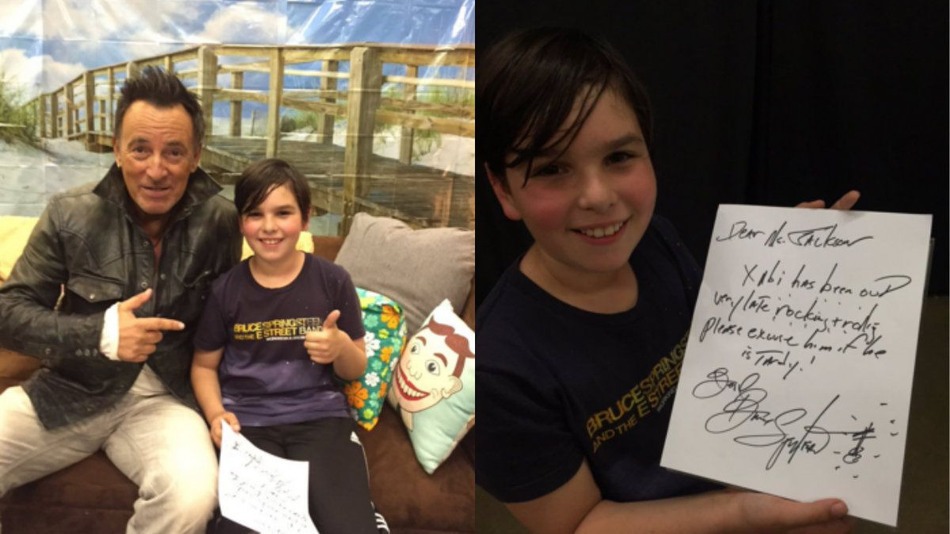 “Dear Ms. Jackson, Xabi has been out very late rocking & rolling. Please excuse him if he is tardy,” the veteran rocker wrote on a piece of paper for the schoolboy, after he was escorted backstage with his dad.

“Although there were many musicians and celebrities at the concert, we were the first people to see him after the show,” Xabi’s father Scott told local newspaper the Claremont Courier.

“He (Bruce) asked him for the name of his teacher, and how he spelled his name. He then pulled out a piece of paper and a pen. As Xabi sat next to him on the couch, Bruce thoughtfully created this beautiful note.”

And Scott, who has been to more than 100 Springsteen concerts over the last 30 years, admitted the meeting was more than he could have ever asked for.

“I have been singing Xabi to sleep with Bruce Springsteen songs since he was born,” he continued. “I imagine that idols rarely live up to your expectations. Bruce lived up to every expectation a nine-year-old boy could have – or a 48-year-old boy!”

However, it isn’t the first time that the pair have had a close encounter with The Boss. Scott revealed that back in 2012, Xabi attended a gig on his sixth birthday, when he also caught Springsteen’s attention with a sign that read, “Today I am six.”

“Bruce saw the sign, came over and waved to Xabi and sang to him for a short period,” Scott ­remembered fondly.

Man Waits For Girlfriend To Get Cochlear Implant To Propose

Is Your Name At Risk Of Becoming Extinct?